My first official reading for Californium 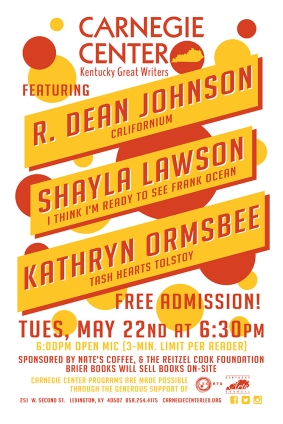 Since then, readings for Californium have taken me to both coasts, seven states, several bookstores, one book group, a few college campuses, and the occasional book festival. I’ve given interviews for print and podcasts, and I even got to be live on NPR one evening with three other writers.

Though there is nothing official about my upcoming reading being the last of a two-year tour for Californium, it has that feel to it:

I’m sure I’ll read from Californium again. I’ve never stopped loving the book and have never grown tired of dropping into the world of Reece, Keith, Treat, Edie, van Doren, and

DikNixon. It’s always a pleasure to go there. But, I’m also glad to be transitioning more and more attention to finishing the next two projects—an essay collection and a novel. The former is close and the latter, who knows, but I like where it’s going so far.

So, this coming Tuesday, I hope all goes as it has gone since that first reading in Lisbon, which is warm and friendly, fun, and well. That’s a proper way to wind down the tour, to end the chapter, and to begin the next.

MAY 19, 2019 – Promoted to Full Professor at Eastern Kentucky University.